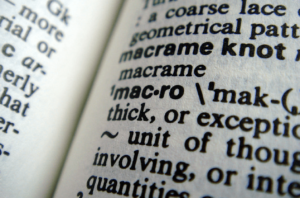 Below is a bit of the lingo developed over the years by bartenders, and frequent imbibers of fancy cocktails. These days your typical customer will be more apt to order simply off a cocktail menu. For those that are true aficionados though… you might encounter some of these interesting drink modifiers.

Here is a snippet from our textbook used for training bartenders. All bartenders should be somewhat familiar with these terms, even if they don’t use them on a day to day basis.

Box Pour into and out of a shaker, usually only once. Gives the drink a quick mixing without shaking.

Call Drink A liquor and mixer, of which the liquor is a defined brand. (ie. Tanqueray and Tonic, Bacardi and Coke)

Cobbler A tall drink of any liquor served in a collins or highball glass with shaved or crushed ice and garnished with fresh fruit and mint sprigs.

Chaser A mixer that is consumed immediately after a straight shot of liquor to create a different taste.

Cocktail Any of various alcoholic beverages consisting usually of brandy, whiskey, vodka, or gin combined with fruit juices or other liquors and often served chilled.

Collins A drink akin to a sour which is served in a tall glass with soda water or seltzer water.

Cooler A drink consisting of ginger ale, soda water, and a fresh spiral or twist of citrus fruit rind, served in a collins or highball glass.

Crusta A sour-type drink served in a glass that is completely lined with an orange or lemon peel cut in a continuous strip.

Cup A punch-type drink that made up in quantities of cups or glasses in preference to a punch bowl.

Daisy An oversize drink of the sour type, normally made with rum or gin. It is served over crushed ice with a straw, and sweetened with a fruit syrup.

Eggnog A traditional holiday drink containing a combination of eggs beaten with cream or milk, sugar, and a liquor such as brandy, rum, or bourbon.

Fix A sour-type drink similar to the daisy, made with crushed ice in a large goblet.

Fizz An effervescent beverage. (ie. that which is carbonated or which emits small bubbles.)

Flip A chilled, creamy drink made of eggs, sugar, and a wine or spirit. Brandy and sherry flips are two of the better known kinds.

Frappé A partially frozen, often fruity drink. It is usually a mixture of ingredients served over a mound of crushed ice.

Grog A rum-based beverage with water, fruit juice and sugar, commonly served in a large mug.

Highball Any spirit served with ice and soda water in a medium to tall glass (often a highball glass).

Julep A drink made of bourbon, mint, sugar and crushed ice.

Lace Normally applies to the last ingredient in a recipe, meaning to pour onto the top of the drink.

Lowball A short drink made of spirits served with ice, water or soda in a small glass.

Mist A liquor served over a glass filled with crushed ice, often a way of serving liqueur as an after dinner drink.

Mulls A sweetened and spiced heated liquor, wine or beer, served as a hot punch.

Neat The consumption of a spirit as a straight, unaccompanied shot.

Negus A punch-like combination containing a wine, such as port, heated with spices and sweetened.

Nip A quarter of a bottle.

Nightcap A wine or liquor taken before bedtime.

On The Rocks A wine or liquor poured over ice cubes.

Pick-Me-Up A drink designed to relieve the effects of overindulgence in alcohol.

Posset An old british drink from which the eggnog was derived. It consists of a mixture of heated ale or wine curdled with milk, eggs, and spices.

Puff A traditional afternoon drink made of equal parts spirit and milk, topped with club soda and served over ice.

Punch A party-size beverage consisting of fruit, fruit juices, flavourings and sweeteners, soft drinks, and a wine or liquor base.

Rickey A drink made a liquor, usually gin, a half lime and soda water. It is sometimes sweetened, and often served with ice in a rickey glass.

Sangaree A tall chilled and sweetened wine or liquor garnished with nutmeg.

Shooter A straight shot of whiskey or other kind of spirit taken neat.

Shrub Spirits, fruit juices, and sugar, aged in a sealed container such as a cask or crock, then usually bottled.

Sling A tall drink made with either brandy, whiskey or gin, with lemon juice, sugar and soda water. It is served both hot and cold.

Smash A short julep made of liquor, sugar, and mint, served in a small glass.

Swizzle A tall, traditionally rum-based cocktail filled with cracked ice. A stirring rod or swizzle stick is quickly rotated between the palm of the hands to form frost on the glass.

Syllabub A beverage made from a mixture of sweetened milk/cream, wine and spices.

Toddy A sweetened drink of liquor and hot water, often with spices and served in a tall glass

Tot A small amount of liquor.

Well Drink A liquor and mixer, of which neither are defined brands. (ie. Gin and Tonic, Rum and Coke)