This spring has been a great one for students coming through our commercial bartending course and getting jobs. There aren’t too many careers out there where just two weeks of schooling can land you a decent paying job. Bartending in Vancouver is fun, and a very fun industry where students just like you can get creative with cocktails! Try problem solving the random issues that pop up behind the bar. Practice some customer psychology and monitor social interactions.  Make some great industry contacts while earning tips.

Adrian S. now bartending at Sammy J’s out in Surrey. Adrian is a keen student of life… and sciences. His path will probably lead him through engineering on his way to eventually becoming an astronaut, but while on that way he wanted to have some fun. Bartending is a craft he figured would be great to round out his skills. We couldn’t agree more. After starting his day classes in May 2019, Adrian also excelled and knew what he wanted. His target location to sling drinks was The Study, but after they turned him down he kept walking those resumes around. Excellent job Adrian and be sure to not forget about us little people when you are looking down on us from orbit!

Tyler K. Anita S. Riley C. and Alexandra T. are now hired on as event bartenders with Lavish Liquid. When the owner of the company came to us looking for some recent bartending graduates with great personalities… we just had to send everyone to him. These four now bartend at events around town, and Riley even picked up a second job with the Keg. Nice work Riley!

Kim K. now working the Keg on the North Shore. Kim joined our weekend classes. As a Fine Arts student at UBC, she wanted something different to do other than play cello. She came in with zero knowledge of liquor and over the next 4 weekends she rocked the written and practical exam with 97% combined. Five days later Kim sent us a note saying she landed a job exactly where she wanted, and was starting Monday. Congratulations Kim!

Kim T. went from our bartending classes to managing at Pier 7 in North Vancouver. That’s quite the step up in just a couple weeks from finishing the classes. She had signed up for our Wine Tasting Seminar, but had to reschedule due to getting a job and having to work that night. Let’s hope she makes it to this next wine tasting, because we need to spend a little time catching up.

Anna I. wanted to work downtown as a bartender. After a couple weeks in class, she did well at knowing her cocktails and spirits history. Our weekend instructor mentioned that they needed a part time bartender to help out at the place he works, and was looking for recommendations. Anna set aside her requirements to be downtown and checked out the fusion restaurant Ancora Ambleside, and they gave her a chance. Apparently the kitchen staff has really taken to her and now the head chef is wondering why the rest of the bartenders can’t be more like her. Way to impress Anna! 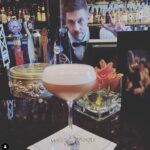 Mason H. wanted to learn some new skills after teaching English overseas. He joined us for our day classes and while in class he connected with a gelato shop needing a barback. Mason started scooping ice cream and stocking the bar at the place only days after earning his certificate. Two weeks later, he was managing the place as the main bartender headed off to another job. Mason joined us for happy hour at the Railway about 6 weeks into his new bartending gig for an update. Fortunate for him, a request came in from the Wedgewood hotel looking for a day bartender in their Bacchus Lounge. We shared the contact details with him and 10 days later he was working his dream bartending job.

Riley C. likes to travel. Travelling is expensive, so he wanted to do something that would help fuel those adventures. Originally from small town Alberta, he made his way out to Vancouver and found us. After some focused learning, and doing well with the classes, Riley put together a great one page resume and marched it around town. Sure, he could apply online, but the best practice is to walk those resumes around, shake hands and greet people. He landed a job at a Keg in only a couple weeks. When the tips and shifts weren’t so great at that location, he leveraged his new experience and dropped by the Railway to talk to a manager. He now works 5 nights a week there, and sometimes makes as much in tips off one table as he was all week at the Keg! Congrats Riley, you owe us a beer.

Tichape M. didn’t even finish our classes. Each night after class, she and her classmates would ‘study’ a few cocktails while roaming around Vancouver. They ended up at the Granville strip a couple of those nights and the bartending manager essentially hired her on the spot… even with a couple drinks in her. She still showed up for that last night of testing just to give moral support to the other guys in class, but didn’t write the test because it was going to be her first shift on the back bar that night.

Oscar D. was in our night classes and tried his hardest to nail the material. His 2 years of bartending in Mexico may have helped with speed, but his cocktail knowledge really needed to level up. In a decently sized class Oscar trailed his peers, but held his own. When it came to test day, he passed. Not flying colours, but meeting the 80% threshold we need to see from anyone finishing our classes to grant them a certificate. Oscar spent his days and nights in the kitchen at restaurants and really just wanted to get to the front of the house. He listened intently to our job hunting tips, and put together his resume. He persistently marched it around to places he wanted to bartend at. Thursday, Friday and Saturday you can find Oscar popping the caps off Coronas at Patron on Robson! Keep being awesome Oscar.

Abee P. came through some holiday classes we had back in December, right around Christmas. She mentioned that she came to Vancouver from back east and out there she was a ‘decent college bartender’. When arriving on the west coast she was quick to land a job, but it didn’t stick. She figured it was a lack of cocktail knowledge because as a ‘college bartender’ she only had to do highballs and basic beer. Before finishing the classes she found another job at Rogers Arena in the Sportsbar. We helped her perfect the drinks she needed for work. We also added another 70 to her repertoire for those customers that just want something else.

Darren G. was a student of ours 5 years ago. After working at some very divey bars in town, he wanted to upgrade his skills and relearn his cocktails. Darren came through the classes again, as part of our lifetime retakes policy, and landed a job at Funky Winkerbeans! Great job Darren! Thanks for coming back through the classes and sharing your experiences with the rest of the class. Returning students are always welcome!

Kai and Brianne recently opened Ampersand in Gastown. As part of their preparation, both of them went through our bartending course to understand the essential skills needed behind the bar. Through their two weeks in class, they made contacts with their fellow students. They also consulted the instructor for tips on what to watch for when hiring new bartenders. They also brought up cocktail ideas for discussion in class. Kai and Brianne ended up hiring Skye as their head bartender, who too is another recent graduate of Fine Art Bartending. It’s great to see entrepreneurs opening some great new spaces in Vancouver. 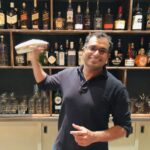 John J. finished up the classes a few months ago. He has been working on a plan for his own cocktail bar. Part of his due diligence was learning some of those bartending essentials. As part of his cocktailing research, John persistently handed out resumes to learn more about different hiring processes and how different managers go about selecting the right candidate. He now works the bar Fridays and Saturdays at ‘W’ located just down the street from us on Pender. As an interesting side note, one of the managers at ‘W’ also came through our bartending course at the same time as Kai from Ampersand. It’s a small world!

Niwi (we know her name is spelled very differently) came through the day class a couple months ago. Originally from Vietnam, bartending in Vancouver is a different set of skills than what she is used to. She wanted to know more while renovations were underway for her Vietnamese fusion restaurant about to open on Fraser Street. She was in a small class which offered a lot of time for questions on building cocktails, hiring new staff and how she should lay out equipment in her new restaurant. We can’t help her with everything, but we can offer our two cents on where we liked having our ice machine.

If you want to learn bartending in Vancouver, then being located right downtown is from Vancouver’s oldest and most established bartending school is probably the best place to start. These are the students we only most recently have heard from. Certainly there are more, and we will probably hear about them during one of our upcoming wine or flair seminars. It’s always great to hear success stories, and our graduates have them. We give you the skills and know how. Persistence from each of these students is what got them hired!