History Of The Margarita Cocktail 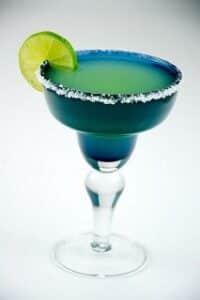 The margarita has had its’ ups and downs in popularity. Tequila continues to be one of the most misunderstood of all spirits. The spirit has been with us in Canada for only a little more than half a century. We have have what appears to be infinite variations of Tequila.

Tequila shot up in the drink charts in the 1940′s when World War Two erupted and imported whisky from across the Atlantic became hard to get, so Americans looked to Mexico for an alternative. Imports from south of the border soared, then slowed to a trickle once peace came. It wasn’t until a few decades later that the agave-based spirit excited the imagination of adventuresome rock groups, and it caught on again.

How the Margarita Became So Popular

The margarita became fashionable in the sixties as The Rolling Stones and The Eagles sang the praises of tequila. The Eagles had the big hit, and their “Tequila Sunrise” was credited with inciting margarita mania among their followers and making the drink a must for the collegiate crowd. Unfortunately many of them never fully realized the beauty of the margarita, confining their drinking to nothing better than sweet concoctions churned out by slush machines. Too many still do, but there is hope as younger recruits step up to hand-mixed drinks and to upscale tequilas.

The Stones and The Eagles were followed by Jimmy Buffett, who scored with “Margaritaville,” and for better or worse by Bobby Bare’s “Pour Me Another Tequila, Sheila” and “Jose Cuervo, You are a Friend of Mine,” by Shelly West.

Promotion is important and the tequila technocrats are as creative, competitive and opportunistic as any of the spirits marketers. They can tell romantic tales of small peasant distilleries in hidden valleys and talk of dukes and grandees and film stars and nobles who swore by the liquor of the mysterious plant known as the Blue Agave. However, what’s in the drink remains the final criterion for acceptance. Today we’re experiencing a boom in fine, limited production tequila as a sipping drink, following similar trends with high-end Scotch, Bourbon and Vodka. The Margarita, however, remains the sword-carrier for tequila, and it is the entry level for American consumers.

Where it all Started

Like the Martini and the Manhattan, even the Cosmopolitan, it appears to have many fathers. The most popular version of its origin goes back to the late 1930′s at Rancho La Gloria, a restaurant near Rosarito Beach, Mexico, just across the border from San Diego. The owner, Danny Herrera, created the drink for a showgirl named Marjorie King. “She was allergic to everything except tequila,” Herrera recalled, “but she couldn’t take it straight or even Mexican style with lemon and salt. So I tried to find another way for her.” 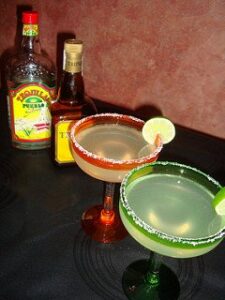 Out of Herrera’s experiments came a blend of three parts tequila, two partsCointreau and one part fresh lemon juice. He added shaved ice, wet the rim of a glass with more lemon juice, dipped it in salt and filled it with the mixture. After Miss King gave Herrera’s alchemy a royal nod, he named it in her honour, Margarita, Spanish for Marjorie.

Another version has a socialite named Margarita Sames blending the same ingredients as a party drink. Hotelier Nicky Hilton was a guest and he went on to feature the Margarita at his Acapulco Hilton. Other reports say the drink originated as early as 1936 at the Crespo Hotel in Puebla, Mexico. Another at the Tail O’ The Cock Restaurant in Los Angeles soon after World War Two.

The basic Margarita recipe, like the Martini, has changed frequently. The most accepted recipe today calls for 1 1/2 ounces of tequila, 1 ounce of Triple Sec(which is a lot cheaper than Cointreau) and 1 ounce of fresh lime juice, combined in a cocktail shaker and shaken, not stirred. Restaurant consultant Steve Olson takes the mix up one level, arguing that Grand Marnier is the only fit accompaniment for tequila and fresh lime juice in a fine Margarita. “Taste the orange liqueur options blind, side by side,” he argues, and you’ll never again consider using Cointreau or triple sec.”

Ingredients in the Margarita:

How To That Perfect Margarita

At Ideya in Soho, standard bearer for Latin American food in Manhattan, bar manager Fernando Peña pours a full 1 and 1/2 ounce shot of Herradura Silver or Reposado in his premium margarita. He also adds orange juice and lemon juice, triple sec and a ëspit’ of Vanderhum orange mandarin liqueur. “Freshness is important here, so we use the same ingredients you might find in someone’s home in Mexico or Peru. We don’t use a sour mix in any drinks,” Peña says. “The fresh o.j. and lime juice provide the right flavour and a miniscule amount of the orange mandarin liqueur gives us just the extra tang we want.”