How to Make and Serve as a Cocktail

This cocktail should be built on ice, in a short highball glass.

Of course you could take the sour raspberry, Blue Curacao and dash of cranberry, then add them to a cocktail shaker. Shake vigorously and pour into a chilled martini glass. Add a splash of your lemon-lime soda to top up the cocktail a little and add even more sweetness. 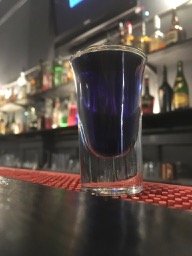 The shot is much simpler to prepare. Serving this shot does require a little care and attention though.

For speed, just grab both your Blue Curacao and Red Sourpuss at the same time and pour both into your shot glass. The majority of your customers wanting this easy shot aren’t drinking it because they appreciate the artistry of layering the red and blue. They just want to slam the sugary shot back, and maybe chase it with a beer.