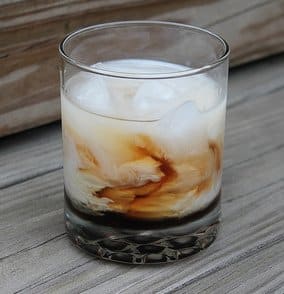 The White Russian was one of the first popular Vodka drinks concocted in the 1930s, when vodka was just beginning its invasion of the West. The name of the drink dates it near the end of World War I, when the “White Russians”, an anti-Bolshevik group, was still in existence. The drink itself isn’t Russian, but the combination of vodka as its main ingredient and the white colour of the cream, give the cocktail its name.

Its progenitor was a drink called a Russian, made with Vodka, gin, and crème de cacao. Cream added to the mix made it a Barbara, a name later toughed up to Russian Bear. When the “Bear” was dropped, we were left with two types of “Russians.” So one was named a Black Russian, made without the cream. The other, of course, is the White Russian.

Why The White Russian Cocktail Is So Popular

Who doesn’t like coffee and cream? The reason the White Russian is such a great little number is because it’s a great drink for people who don’t drink a lot and a great drink for people who drink too much. Despite its taste and appearance, the White Russian packs a wallop. There’s a lot of alcohol in there, but no bad taste whatsoever. So if you don’t drink regularly, you can still get loaded without all the hassle and facial contortions you’d get from, say, a Manhattan. If you drink too much, a White Russian is a fine tasting change of pace, full of that precious alcohol you’re so dependent on, but with a rich creamy taste.

The White Russian a tasty cocktail recently revived by being featured as the Dude’s favourite cocktail in the Big Lebowski. Enjoy this creamy coffee beverage in a worn out housecoat while lazing around home, or dressed up in a tux ready for a night of glamour.

Your White Russian should include the following ingredients:

Pour vodka and your coffee liqueur over ice in a short glass. Add the cream on top then serve. Alternatives to that heavy dairy might include Half and Half, milk, or even non-dairy alternatives such as soy or almond milk. 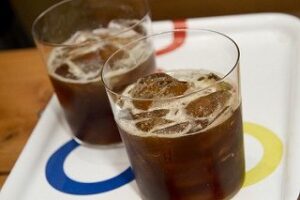 Called a Black Russian due to the darkness of the cocktail, and absence of the cream. This drink officially originated in 1949 in Brussels. The story says that a Belgium barmaid at the Hotel Metropole created the drink as a tribute to the U.S. ambassador to Luxembourg, Perle Mesta.

Simpler to prepare, the Black Russian only needs the following ingredients:

In a short glass, just add the Vodka and coffee liqueur over ice. Give the liquors a quick stir and serve.

Interesting Variations of the Black and White Russian

To make a Black Russian ‘Long’ or ‘Dirty’ you will need:

Make this drink in a tall glass, loading it right to the top with ice. Add your vodka and coffee liqueur to the glass. Top the drink with cola to create a sweet, coffee tasting cola cocktail with a bit of vodka to kick it into high gear. This cocktail is a great pick-me-up and can get the party started quickly.

Colorado Bulldog (aka. The Vodka Paralyzer)

In Canada, we call this cocktail a Paralyzer (sometimes spelled Paralyser). We effectively take that Dirty Black Russian from above and top the cocktail with some cream. This isn’t a pretty drink, as that cream can start to curdle when in contact with the cola but lovers of the Colorado Bulldog know what they are getting when they order it.

Your Paralyzer should include the following Ingredients:

Add Vodka and your favourite Coffee Liqueur to a tall glass over lots of ice. Fill the with glass with cola leaving some room on top for the cream. Slowly float that creamy top and serve with a cherry garnish. We also do a tequila version of this cocktail. What is it called? Uncreatively… a ‘Tequila Paralyzer’.

Of course you can always make a drink sour. Nightclub style whiskey or amaretto sours are slowly going by the wayside. Those nasty concoctions of a shot of a spirit and some cheap bar sour mix can’t disappear fast enough. With the Black Magic cocktails we have a fun twist on the classic Black Russian which makes it a little sour.

Combine ingredients in a rocks glass over ice. Garnish of course with a lemon twist.

A couple of other closely related cocktails you might also be interested in are the Smith and Kearns.